My ex is an arsehole, although you probably already know that, given the title of this post. 😉

We have been separated for around 15 years and divorced for about 11, but he still insists on deliberately trying to annoy me. 😦

I have always allowed him full access to the children. He has had them half the week since we separated – with me often leaving in tears because the children were screaming to come with me. They were very young, just 2 & 3, and obviously had to get used to the situation. It doesn’t stop that sound ripping your heart out every time they call after you though, and still haunts my dreams all these years later…

The reason he had them half the week wasn’t because he is a loving, doting father. Oh no. It was because it halved his maintenance payments. That’s the type of father he is. But the children are now almost 17 & 18, so adults really. However they aren’t allowed to choose when they go to their fathers now. Nope, he still insists on them going every weekend whether they want to or not. Their social lives don’t matter. He lives too far for them to pop back to see their friends, so when they go to his house they are completely cut off from going out. They just sit in their rooms until its time to come home.
When I think about them over there, I feel so sad. I don’t want them to go at all. He had said they could choose if they went when they got to 16. When they reached 16, it changed to 18. We’ll see what happens when Stroppy 1 has her 18th in a few weeks time. If he remembers…

Anyway, the reason for this particular rant is an occurrence last week. Wednesday to be precise. You see, Stroppy 2 was meant to be staying with me for the week, then going to his Dads on Sunday (tomorrow). We had been visiting lovely man at the coast and came home on Wednesday in the late afternoon. I was just doing dinner and he came into the kitchen and said Dad had called. Dad (arsehole) had said that as we were home and Stroppy 2 didn’t have immediate plans, he was to go there – meeting his grandmother first. She was flying down. On a 10.30pm flight.

So this meant that he expected my son to get three buses to the airport at past 10pm, then travel with her on a coach to the nearest town to his house. The coach was to leave the airport at 11.30pm. Then, after 40 minutes on the coach, they were to get a cab to his house. I was bloody furious!!! How DARE he?

My problem is that my son is too nice. He’s thoughtful and kind, and puts everyone else before himself. He just couldn’t see the danger in him doing that journey so late at night. And neither could the arsehole, obviously….

I spoke to lovely man, who said to speak to my son and see how he felt about it. I did – he said he ‘didn’t mind either way’. You see what I mean? Too nice. He really wanted to stay at home so that if his friends made arrangements he could be included. But he just can’t seem to stand up to his Dad. Had this been Stroppy 1, there would have been no discussion. She would have told him no – plain and simple. But arsehole knows he can manipulate our son, and that’s what really gets me. Why would anyone treat their child like this?

I asked my son if he wanted me to call his Dad and tell him he wasn’t going, but he said no – he didn’t want to leave his Nan with no one to collect her and carry her bags, and knew his lazy arse of a father wouldn’t go and meet her.

The reason I asked my son if he wanted me to call was a) he’s almost an adult and b) I don’t really talk to the arsehole much any more. We had quite a good relationship until he met wifey number 2. I knew her, she knew me – we got on quite well. She even asked me if it was OK to date him. I happily said yes. I had met lovely man and although I got on with my ex, he was my past.

Then she moved in. And turned into the She-Bitch from Hell. It was a truly awful transformation and turned all our lives upside down. I was stopped from calling my children to say goodnight (they were 5 & 6 at the time). If I called regarding school or sickness issues I had to speak to her rather than their father. Then I called one day to let him know when parents evening was, and was told that she had said I was no longer to call the house – and he wasn’t coming to any more parents evenings with me. Her 3 sons were moved into the house, so my children felt like lodgers in what had always been their home. My son actually slept in what was his room with her 3 sons when he stayed each weekend. On a pull out mattress.

Then they moved. Not just around the corner. Nope. This is a good 40 minute drive away – and the children were still expected to get to school. She dropped them off, but it still meant they had to be up ridiculously early to get to school. The reason for the move? She no longer wanted to live in ‘my’ house. How pathetic is that? I hadn’t lived there for years, but she was still so insecure in her relationship that she uprooted them all to live in what is essentially a shit hole.

Then? She left. And took the car. My children were 12 & 13 by then, and she took their only means of getting to school. What’s worse is that she worked at the school they went to. When she was leaving she sat them down and told them it wasn’t their fault and that she would only be round the corner. She said they could visit her anytime. And she hasn’t spoken to them since. Not a hello in the school corridor, not a birthday or Christmas card. Nothing. They were stopped from seeing her 2 grandsons, who were around 3 and 18 months at the time. They loved those children – they were the only enjoyment they got at their Dads. And she just cut them off completely.

I sooooo can’t wait until my daughter leaves 6th form and I can tell her what I think of her. 😉

Back to the arsehole. We communicate a little more now, but it hasn’t ever got back to the way it was before the Stepmother from Hell. He still insists on not telling me anything about holiday plans, dates, etc. Like this Easter break. I called FOUR times before I got some sort of sense from him with regards to dates. It’s like because he has no life, he wants to interfere with ours and make it as difficult as possible. I’ve been disabled for just under 20 years, so he knows how bad my back is, but last Wednesday had no qualms in demanding my son go there so late, while knowing full well that I wouldn’t let him take 3 buses to the airport. So at 10pm on Wednesday evening, I was wrapped up and driving to the airport and back – while my ex husband was sitting at home getting drunk. Again.

When will I get a backbone? When will I call him and tell him to ‘fuck off!!!’ – which is what I’ve wanted to tell him for years.
I don’t. Because of the kids, I chose him and he’s their Dad, no matter what any of us think of him. I don’t tell them how I feel, but they know now. They’re old enough to sense it and see it.

There are times I’ve wished he would drink himself to death so that they won’t have to put up with his weekends of encouraging them to drink with him, because he has no one else to drink with now the She Devil has gone. Is that awful? It feels awful, but I don’t want them drinking in pubs with their Dad because they feel sorry for him. I don’t want them spending weekends over there with nothing to do – bored and isolated. Wanting to grow and be with their friends, but not able to do so.

To get home from their Dads now they have a 30 minute walk to the town, a 40 minute coach journey, then 3 buses home. Nice…..

What do I do? If I call him about making my son go at that time we’ll end up arguing because he really won’t see what the fuss is all about and that will annoy me more. If we argue then he’ll be grumpy and take it out on my son – not physically, but just being ‘offish’ with him and moaning at him because I called.

If I don’t, I’ll feel I’ve failed the kids. Again. 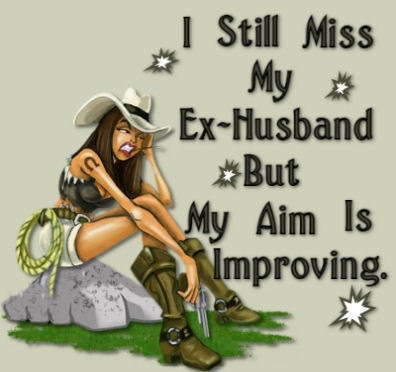