Not my own of course, but the ones that are allowed to roam in packs, with no thought by their parents of other people. The feral, chav types.

I have a group of them near me and they cause chaos on almost a daily basis. They have scrambler and quad bikes and like nothing more than to terrorise the elderly and little children by shooting along the pavements illegally on them, roaring with laughter if people have to move for them, or flashing filthy glares at people who dare to tell them off. This is invariably accompanied by a mouthful of foul abuse. Lovely…..

Anyway, after having called the local ‘community police office’ and getting an answer phone (several times!) I tried dialling 999. This was an emergency – this had been going on since lunchtime every day since the holidays began. That was two weeks ago and they still haven’t caught them. I’ve often thought about parking my car opposite the house, attaching some rope to it, then pulling it up when the buggers go past!

You see, they have a no through road that has a walkway through it, so the police can’t catch them as they drive to one side of the dead end only to be stuck while they get away. Little shits….

Where are the parents of these young men – which is what they are at the ages of 16 to 18 ish? With depressing honesty I have to say they are probably at home, having a fag and enjoying peace and quiet while their little darlings are out on these death traps that the parents bought them. Nice.

A lot of the teenage girls are worse than the boys if I’m honest. They wander around with very short skirts and low cut tops with their faces slapped with make-up just to attract these scummy boys. Why do they feel the need to do that? And now they are turning up in droves with prams. Great. Just bloody great. Another generation of scum to defy laws and cause nuisance wherever they go.

Surely the police or government have to do something because kids having kids to get a council house needs to stop. NOW. Then, and only then will our teenage pregnancy rates go down. And while I’m on a rant about it, it wouldn’t be a bad idea to bring back National Service. Teach them to respect other people and not just think of themselves constantly. 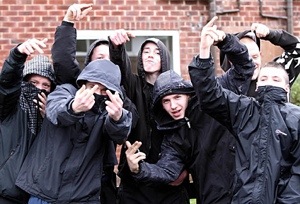